I had a FaceTime with my Dad last night. He asked me to shave. 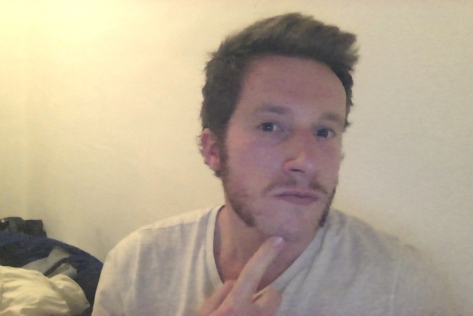 My unlucky streak starting when my bike got robbed continued through to my rugby game on Sunday. In the 70th minute of the game, I was rolling out of a tackle situation and got knee’d in the forehead. Almost instantly, I got an egg-sized hematoma on my forehead from ruptured blood vessels. I’m going to rest up this week, under Dr. Bruce’s orders. Don’t look at these pictures if you get grossed-out easily:

I had my roommates wake me up sporadically throughout the night to ask me simple questions and make sure I wasn’t losing brain function from brain swelling. ‘What’s your middle name?–they thought there was a serious problem when I was answering David (not knowing my full name, Samuel David Bruce)– What do you use to brush your teeth? What country are you from? Who did we play yesterday? But one guy, Jappy, started grilling me on all the capitals of European countries at 3am. Not fun. My head feels fine, but I’m going to give it the rest it deserves. It’s the only head I’ve got and I like it.

The night before, a few of us went out for Turkish food at a neighborhood restaurant. Mikey, the British scrum-half and John, the German outside center brought their girlfriends along, so Bruce and Archie, the Scotsmen, were left to supervise and fifth/sixth wheel. It was good fun. The menu was in Turkish and Dutch so I went with the safe option–hummus and mixed grill, perhaps the only thing on the menu I recognized besides ‘bier.’

Good food and good company are one of life’s great treats. These scenarios feel especially sweet this year with new foreign friends in unexpected circumstances. Also this week, I went back to 78 Maaskade to join Marco, my old roommate, for a delicious home-cooked meal. I met a Swede who spent 3 months in Mumbai this summer. He got me super jazzed up about going to India. He said it’s an amazing, amazing place…and you get over the sudden, weekly midnight food-poisonings pretty quickly.

Today I went to Dordrecht, the oldest city in Holland. It was granted city privileges in 1220.  Dordrecht suffered from one of the nation’s greatest floods in history, the St. Elizabeth’s Day flood. I saw a painting about the catastrophe when I was visiting the Rijksmusuem. The flood was in 1421 and the panels was completed around 1490.

After the flood, Dordrecht established economic power in the timber trade as an important junction along the river. During the golden age, the 17th century, most of the components of the city were reclaimed from the river and the city expanded and developed. The old city center is basically just a conglomeration of harbors connected by cutesy dutch bridges. You really get a sense of the city’s longevity with the mix of architectural styles.

Most of the old city center was a ghost town. All the stores were closed this Monday. I’m not sure why.

I took the waterbus there and the train back. As I was pulling up to the riverfront drive, I saw the waterbus hurtling its way towards the station, so had to race it by bike to catch it and not have to wait half an hour. The thing cruises at 40kph and smoked me! So thankfully it had about a 10 minute lag at the station. I’m convinced the captain saw me scurrying along the bank to get on. What a guy! Here are some pictures from the day:

Here are some drawings:

A christmas card I’m working on for the boys. 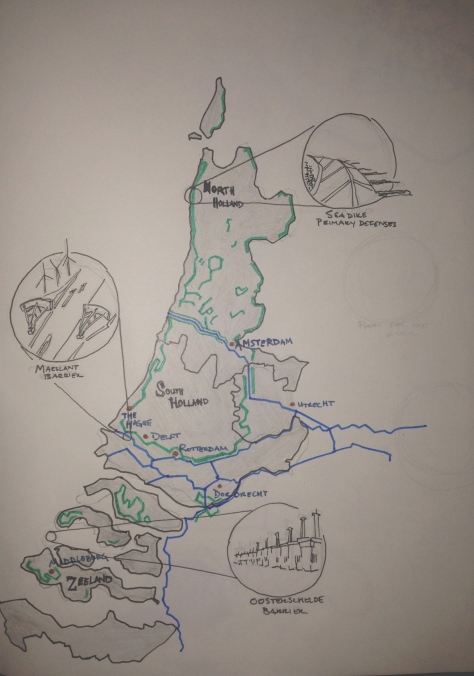 A  map I’m making with the provinces (North and South Holland) that I’ve become familiar with and some notable climate adaptation infrastructure. 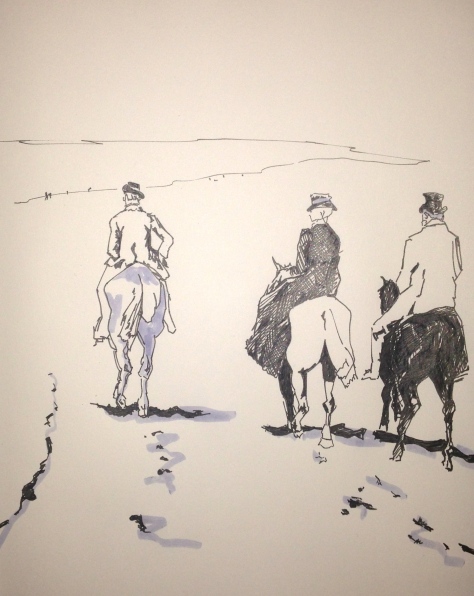 A drawing based off a painting at the Rijksmusuem.