I saw a guy juggling a soccer ball on the 8th floor of a scaffolding today. The floor was partially installed. If the ball dropped down a floor or two, he would slide down on the I-beams. It reminded me of ‘Man on Wire’ where the french tightrope walker went across the world trade center towers. But he wasn’t doing it to show off or get attention. I’m pretty sure I was the only person watching him, standing on the fringe of a busy road. Death was on the line; it didn’t stop him.

A nice young boy opened the door for me after I picked up a snack of mixed nuts from a convenience store. I thanked him cheerfully for his overly friendly gesture. He stuck out his hand in need of food or money. Oh…right.

Like in Bangladesh, I’ve gotten huge smiles here in Jakarta. For the most part, people are genuinely happy to have foreign visitors. It’s a very welcoming place. I was greeted by “Hello mister!” all over the city.

I went to the harbor, through the poverty stricken neighborhoods of North Jakarta (the most vulnerable to disaster). Many lived in tin shacks, some of the homes were even built on stilts on the water. At the harbor, men were loading cement onto gigantic wooden clipper-ships. The ships had gigantic bows then would bend like bananas into the water were the middle would sit only a couple feet above the water then the stern had large cabins and cockpits like cargo freighters. I paid a man five dollars to canoe me around the harbor. I didn’t enjoy the elderly man laboring on my behalf so I asked for the extra paddle. There were only a few strokes where I didn’t stroke through some sort of garbage or debris. 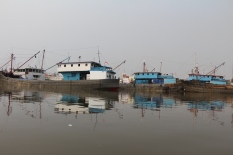 I got a tour of the Masjid Istiqlal, the largest mosque in Southeast Asia from a man named Bibi. The central prayer room was a fantastic indoor space with four floors of balconies for overflow.

The traffic in Jakarta is notable. There are times that its so slow that I want to get out and walk. But I cant get out of the taxi because I can’t even open the door. It’s not just bumber to bumber. Its window to window. Tire to tire. The city’s train line is practically empty most of the time so a great way to get North or South. It seems that the city’s transportation system is all about self ownership. There are millions of motorcycles and cars for those who can afford them. The traffic is a case in point that Adam Smith’s theory does not apply universally. The pursuit of self-interest does not lead to any societal benefits. It leads to a gridlocked traffic.

Jakarta is not walkable. Many streets don’t even have sidewalks. With no side walks, there are therefore no crosswalks. So you just have to go. And don’t make any sudden movements or you are mushed meat. The streets in India are more  crowded, but here everything moves at much higher speeds making them much more intimidating to cross.

I saw a man put on his prayer cap underneath his helmet. (At least the majority of people here helmets). It’s swelteringly hot. So I can’t see why he put it on unless to say ‘The roads are dangerous. My safety will be decided by Allah.’

As the end nears (I even have a domestic US flight booked from NYC to Memphis for the final presentation and conference) I’m finding it strange to think about heading ‘home’. I’m getting closer and closer to committing to London next year.

Back to standing on the side of a one-way, two lane road for minutes figuring out how to cross–as if its more intimidating than multivariable calculus.

Back to toddlers standing helmet-less on the gas tanks of speeding motorcycles hanging over handlebars like they’re monkeybars and wives side-saddling the on the back cradling a baby.

Back to Muslim prayer calls amplifying out of indiscernable corners of the sky.

Back to cars making seven and a quarter lanes out of a four lane highway.

Back to a mega-city in the developing world. It’s hot, wet, and crowded.

I’ve landed in Jakarta, Indonesia. One of the worlds most sprawling, populated, and polluted cities. It is ranked up there next to Dhaka and Manilla as one of the most vulnerable to climate change on the planet. Each year the northern fringes of the city suffer massive floods. Not to mention the city is in the heart of the Pacific “ring of fire.”

Jakarta is on Java, the most populated island in the world. Java is one of 18,000 (give or take depending on the tides) islands in the Indonesian archipelago. It’s a country of 245 million, the fourth most populated in the world. Over 700 languages are spoken. The archipelago stretches for 5,000 miles across the equator and descends diagonally from west of the Malaysian peninsula all the way east to Northwest Australia.

Descending down into Jakarta, I got a fuller understanding of what it means to be built at sea level. Besides color and texture, the landform is not differentiated from the sea. They are on the same plane and blend together without a definitive coastline.

Jakarta is 35km from here. The topography does not change.

I was forewarned about the touts, thieves, and thugs at the Jakarta airport arrivals. My advisor hadn’t been to Mumbai, Kolkata, or Dhaka. We didn’t have a common denominator of shared experience so I took his warnings into consideration, but mostly shrugged them off.

Outside the airport, the freelancing cabbies were easily deflected with slight smiles and sideways “no thanks” head shakes. The touts could be confidently walked past. In comparison, outside of the central train station in New Delhi, I was followed for a quarter kilometer, poked, and prodded until I had to turn and go nose to nose (his nose was at my chest) to get him to back off.

I found the certified, trusted cab company recommended by the directions my hostel provided.

The cars here are modern and mostly Japansese: Suzukis or Toyotas. They are air conditioned, worlds ahead of the 30 year old fleet of HM Ambassadors held together with loose screws and duct tape that run the streets in India. But besides the material make-up of the roadways, the city’s chaos is on par, or perhaps even greater, than the South Asian giants.

As the largest city in Southeast Asia, the city sprawls on ceaselessly across the flat landscape. The traffic is severe. My ride from the airport craftily got into a chain of fifteen cars drifting, uncomfortably fast, in the wake of an ambulance. At least emergency response was be close by.

In many ways, its like I’ve come full circle back to the lowlands of the Netherlands, there are canals, levees, and sheer flatness. But Jakarta looks like the Netherlands through a filter of the future incorporating a lens of the 2080 projections of global warming and population growth. It feels like I’ve returned to Rotterdam, but almost apocalyptic. It’s as if the Dutch city has abandoned its commitment to green urban development completely.  The urban expanse goes on and on.

On the ride into the city I caught some glimpses of the city’s canal ways, laced with garbage and stilt shanty-towns.

At traffic intersections, motorcycles charge off the red lights lights weaving in and out to get ahead of four, six, and eight wheeled vehicles as if they are gazelles or mice running out in front of a stampede of elephants.

It poured with rain today. When it stopped in the late afternoon. I went out to explore the neighborhood, dodging the puddles carefully along the fringe of the road. Like in many of the other ‘developing’ cities I’ve been to, the sidewalk is non-existent or occupied by impromptu restaurants, carts, garbage, and temporary (or permanent) shelters.

I made the mistake of wearing flip flops so my feet quickly turned into unrecognizable forms. I hope they don’t shrivel away into oblivion. People greeted my presence with a familiar look of inquisitiveness–a look that simultaneously says “What the fuck are you doing here?” and “Welcome! Glad you’ve come!” I usually give a head nod and a smile. Most the time that’s reciprocated by some of the biggest heartwarming smiles I’ve ever seen (even from some of the most thuggish looking people) that is rare to find in the hustle and bustle of our western cities.

A gang of skinny 12 year old boys passed by me. Each one had hair frozen solid with hair gel. They were toting cigarettes. One of the boldest gave me a “What’s up dude?!” nod as he toked his dart and blew the smoke in my face.

You’ll be happy to know that I’m an millionaire. I’ve got 1,500,000 Indonesian Rupiah in my back pocket, about 110 USD. It becomes monopoly money at this point.