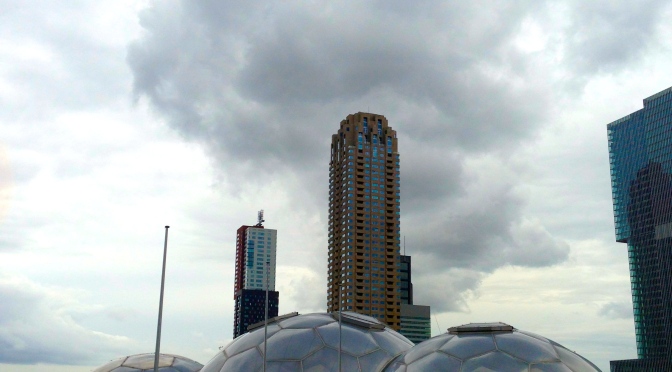 This morning I biked across the Erasmus bridge to Rotterdam-Zuid (South Rotterdam) to investigate the Floating Pavilion, designed by DeltaSync architects. The floating pavilion is situated in an old, unused harbor that the city is trying to revitalize. The pavilion is used as a public gathering space and is home to the National Water Centre. It also serves as a message board for the Rotterdam Climate Initiative. Rotterdam is trying to present itself on the international scene as a forerunner in innovative water and energy solutions, sustainability, and delta-environment construction. In some ways, the pavilion is the keystone symbol of that mission.

FP is an example of a structure that could be just one building block of a bigger floating community.

The building floats on its foundation, which is constructed from a combination of concrete and expanded polystyrene–I can’t tell you much since I barely scraped by in Chemistry 109 four years ago–but I know that it’s a type of foam that makes the platform unsinkable. It consists of 98% air, the rest is a closed cell structure. I assume it’s similar to the way water consolidates into a hexagonal crystal structure and can float. Correct me if I’m wildly wrong. The facade of the building is sort of a hideous bubble. It absolutely looks like the underwater city Jar-Jar Binks was exiled from in Star Wars. The plastic cover of the building makes it light, but also heats the building to reduce the pavilion’s footprint.

Of course, floating structures aren’t suitable for all marine environments. This building is located in a sheltered harbor about 10 miles inland of the ravenous North Sea. The Netherlands doesn’t get hit by hurricanes and tropical storms. So obviously floating communities aren’t practical for many parts of the world. But in the Netherlands, living on the water can be a way of life. From the house boats on the Amsterdam canals, to the floating IJburg community, there is a market for people who want to zen out with the agua.

The Rotterdam Climate Initiative has posters and information posts in the floating pavilion. The whole building is sort of the flagship of the city’s initiatives towards climate adaptation. The city has a goal of reducing its CO2 emission to 50% of its 1990 levels in the next 12 years. In the more foreseeable future, Rotterdam wants to be a sustainable, attractive, and 100% climate-proof city while maintaining its economic integrity. Rotterdam is aiming to set examples for other delta cities. 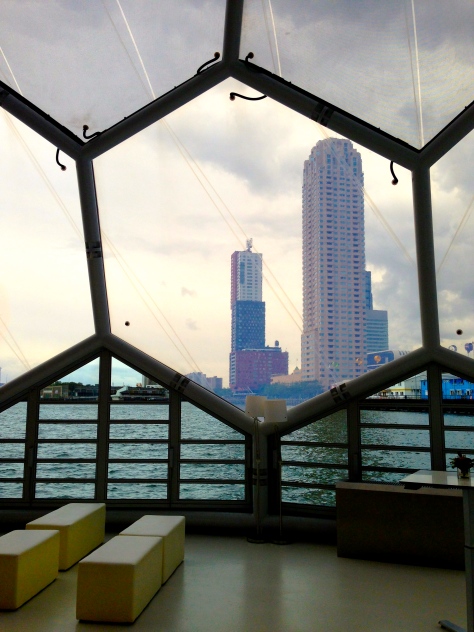