There is a myth about Bruces and spiders. No male Bruce is ever allowed to kill a spider.

To keep the story short, one special spider pumped Robert the Bruce (King of Scotland) up so much that he fought all the British out of the highlands and won Scottish Independence. As I’ve been told, it’s terrible luck to kill a spider. I’ve never intentionally killed one. Although I heard a rumor that you eat at least a spider a year in your sleep.

There are no rules working the other way though. The spiders of Venice ate me alive. And I probably ate a half dozen of them considering I definitely had some crawling on and biting my face.

Buckle up. It’s going to be a long one. It has been a while and I have a lot to catch you lot up on. Even my older brother Benjamin, who is as easily entertained as a 6 month old kitten, has been asking me why I’ve been so lazy.  More recently the question turned to, ‘are you even alive?’ The answer is almost. I’m a tattered carcass eaten up by the creepy crawlies in Venice.

Here I am. In Rome. I clawed my way out of the Venetian lagoon alive with four spider bites on my face, (one right under my eye which looks awesome). My hands, arms, and shoulders are lumpy, an incredible gnawed up topography that’s making the alps look down jealously.

Yesterday was my birthday. Happy birthday to me. I did something I hadn’t done before so I ate squid. I didn’t like it that much. It wasn’t fried-up and delicious like calamari. It was a whole squid. I would have had more fun eating a series of erasers. Add some butter and lemon and it would have tasted the same. But whatever. I ate squid.

Venice should not exist. It’s beautiful, but at the same time it’s hideous. It is a theme park for tourists with too much money and too little creativity to think of a more original place to spend their vacations. Venetians, besides the trattoria owner where I ordered squid, are rude and mean to tourists even though the whole city is propped up by tourism.

And that’s about all the city is propped up on. The city’s foundations are built into mud and most of the buildings lean one way or the other. Some lean a lot, like the a church tower near the Piazza San Marco.

I don’t like tourists. Even though I am one. But I’m different. #2chainz

Either way. Venice is beautiful. I won’t argue there. The uploader is being fussy. I’ll update this post later with more pictures.

It’s a great city to look at thinking about how cities can function on the water. There are no roads in Venice. Every daily necessity, post and packages, construction materials, beer, wine, vegetables all need to come in on boat through the canals. The only roads are waterways and it was really interesting to see how the city got by with services brought in via agua. It’s funny to think that Venice isn’t doing something special, rather it’s just sticking to a historical method. For centuries, waterways were the lifeblood of cities. The horse-less carriage took over and developed into lorries and 18wheelers, but in Venice, the traditional way remained. There is just no other possible way to do it.

There is water everywhere. creeping up against the stone banks of the canals. Storefronts have special fittings to slide boards in and keep water out if the tide breaches the streets and there are temporary elevated walkways that can be installed when the streets get flooded. Otherwise, you just get wet. Here are some great pictures showing Venetians making the most of the tides and rising seas: here.

Besides small scale adaptation, Venice is completing the MOSE project, a large scale flood barrier designed to isolate the Venetian and the surrounding islands in the lagoon from the Adriatic Sea and keep the water level surrounding Venice lower than elsewhere. 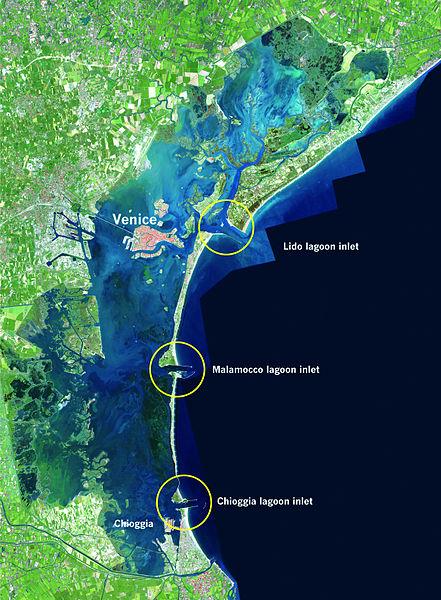 Bonkers. It’s all underwater so there wasn’t anything for me to go see. This youtube provides a sound explanation, though.

Where there is a will, there is a way. Venetians have a will to keep that place around. As Lonely Planet puts it, “You may have heard that Venice is an engineering marvel, with marble cathedrals built atop ancient posts driven deep into the barene–but the truth is that this city is built on sheer nerve. Reasonable people might blanch at water approaching their doorsteps and flee at the first sign of acqua alta (high tide). But reason can’t compare to Venetian resolve.”

Before Venice I was in Berlin, probably my favorite city I’ve seen so far. Here’s what I wrote on the plane about the trip:

I’m typing this out 25,000 ft above Germany. The cabin is turbulent, rumbling around in the evening wind and rain. Sitting in the very back row in the window aisle, I’m looking anxiously around at the joints of the EasyJet doors and hoping that the budget airlines use non-budget materials.

Below me is Berlin, an absolute ogre of a city. I mean ogre in the sense of donkey-loving green-knight rather than rip your eyes out and pop them in a martini ogre. It is a city of layers.

Berlin is a city that is condensed with history. The history has left it’s mark on the architecture and has visibly scarred the built environment. From bullet holes to cold, boring soviet architecture to Prussian Palaces, you can see signs of Berlin’s history everywhere.

You see the city’s attempt to move on from its more recent horrific historical episodes in many ways—through amazing memorials and museums—but mostly through the vibrant culture that has emerged out of the dust and rubble. The city is not rich—it’s struggling to find the funds to rebuild the central palace and the project has been delayed for almost a decade. But the city is culturally rich. It is stocked with young people, artists, photographers, filmmakers, musicians, or graffiti artists. Here are some examples from the Mauer Park Flea market. It’s such a vibrant place. Scenes like this were easy to stumble across.

I was lucky to get to know a Berliner, Mustafah who moved from Brooklyn to mesh into this artistic haven. Mustafah uses the city as an access point to reach all corners of the earth and shoot photographs for his project highlighting the misuse of water—the world’s most precious resource.

Mustafah Abdulaziz has spent the past couple years creating a portfolio of photographs that show human interactions with water all over the world. Ranging from shooting cholera outbreaks in Sierra Leon to documenting religious customs on the Ganges, Mustafah is attempting to create a comprehensive overview of water related issues all over the world.

I first heard about Mustafah after seeing some of his pictures in an article in the New York Times when I was doing some research on Varanasi, India.

I really liked the work, incredible stuff, so I went to his website and learned more. See his work here. I got in touch, just tossing out an email and hoped for a response. He got back to me quickly, saying he was off shooting in Pakistan and would write me in full when he got back to some spectrum of normalcy.

We met in a café in Berlin and shared our stories. He’s only a few years older than me, maybe 26 at this point. I am a guy who is just jumping into the real world, and diving into my first project solo without guidance of professors, teachers, or formal structure of school. I was most impressed seeing how laser-focused and driven Mustafah was about his artistic pursuits. As someone who is just knocking on the door of the art world and peering in, it was great to see the impact that dedication and passion can bring to what you’re doing.

I’m sure Mustafah and I will connect and talk further as we both get down with our projects.

Some other highlights of Berlin:

-Daniel Libeskind’s addition to the Jewish Museum. I’ve never had an emotional response to architecture before. The garden of exile is on a sloped ground, but huge rectangular pillars rise off the ground, creating odd angles. We are used to 90 degree dimensions walking around space. In this garden, the angles are skewed. Just walking around for 3 minutes made me feel so nautious I had to go inside. At the end of the hall of the holocaust, you enter a giant chamber that is traingular and four stories high. It is the same temperature as the air outside and has one slit at the top to let in natural light. But, it’s not the cold air in the chamber that makes the experience chilling.

-Walking tour. A British guy gave me and some other people in my hostel a free walking tour (you pay by tipping). He rattled off amazing facts about Berlin as we walked around the historical sites. Amazing stuff. Got me curious. I definitely want to start reading more about the history of Berlin.

-East Side Gallery. The largest remaining section of the Berlin wall no longer separates Berliners, but brings them, alongside flocks of tourists to see the largest outdoor gallery in the world. Graffiti. But you don’t need to go just here for cool stuff to look at. There is graffiti all over the city. 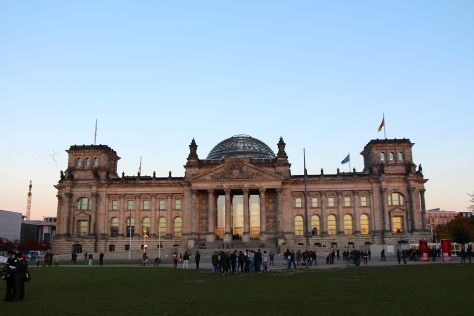 Believe it or not, I’m 3 months into the year. So I had to write my first ‘long letter home’ to the Fellowship HQ:

Having some trouble uploading stuff. Will post more, with recent drawings and watercolors later!