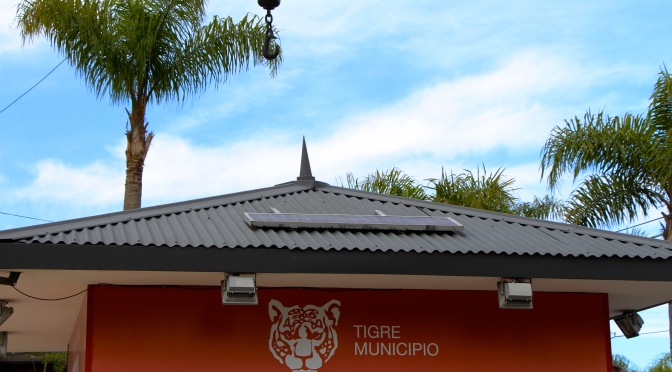 16 pesos roughly translates to 25 cents. That’s how much it cost me to get to Tigre. El Tigre is a small town on the Paraná Delta, 45 minutes north of Buenos Aires. Paying for the ride with the scraps in my pocket was a fresh break. In the Netherlands I had to scoff up about 20-25 euro’s for an equivalently distanced ride.

I don’t know if the moving carriage can be considered a train though. I was hustled and heckled by about twenty five different vendors–cookies from the grocery store, Jesus stats baseball cards, homemade electronics, bubble gum, or off-tune guitar chords were just some of the products that were being sold. The salesmen were relentless, but they never came back more than once. Different shops just kept on coming through. Once they had made an offer to everybody on the carriage, they got off and waited for the next train.

I opted to take the city commuter line, rather than the tourist-oriented coastal line. The coastal line might have provided nice views but I couldn’t pass up the opportunity to see some more of Buenos Aires…or the convincing price.

As you pull out of Retiro, Buenos Aires’ central station, you get a good glimpse of one of the city’s Villas. (Vishha in Argentine/Porteño Spanish–the double L is pronounced as an ‘sh’ sound–Pollo, chicken, becomes Poysho). A Villa is sort of the Buenos Aires analog for one of Rio de Janeiro’s Favelas. Bolivians and Uruguayans began to squat alongside and eventually take over the rail tracks. They plugged themselves into the electrical lines and cables, built houses, and set up their own community. Alongside the tracks there is a shanty town, a mixing pot half complete houses, tin roofs, laundry lines popping through caving roofs, or cardboard signs for schools.

The poverty was immensely visible. But it was exacerbated by the Buenos Aires Lawn and Tennis Club that was over a fence and through a thick brush beside it. The red clay and grass courts define the club that hosts Buenos Aires’ professional tennis tournament were first set up for the city’s elite. Yesterday though, the place was eerily empty as the train rolled on by. Directly next to first world amenities is a third world shanty town.

Tigre had a similar aesthetic to the Withlacoochie River and Okefanokee Swamp that I canoed last spring break in Georgia and Florida back in the states. The banks of the rivers were lush and green, but then the water was thick dark and ominous. As far as I could tell though, there were no alligators like in the Withlacoochie. However, chemicals, trash and pollution were stirring beneath it’s depths. The river that passes through Buenos Aires is one of the top ten most polluted rivers in the world.

Tigre is the home of all of Buenos Aires’ antiquated rowing societies. There are about 18 that each have their homes along the main drag of the delta. Most of the city was shutdown on Monday when I was there, their real rest day after the hustle and bustle of the Sunday market places. Todo estaba cerrado.

El Tigre is situated on an island thats created by several small streams and rivers. The whole area is lowlying and especially vulnerable to floods. Last year Tigre was hit by ‘sudestada’ the Spanish word for floods from coastal storms. Everywhere I walked yesterday was under a meter of water last September.

I’ve recently gotten wind of a town South of Buenos Aires that was underwater for a quarter century: http://www.theatlantic.com/infocus/2011/07/the-ruins-of-villa-epecuen/100110/

One thought on “El Tigre”