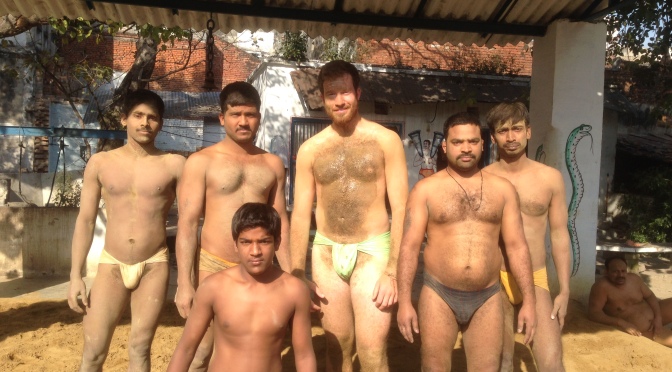 7am on Saturday morning, I was led into a back alley of north Varanasi by Anil, the trusted auto rickshaw driver of Kriti Gallery. He grinned at me, ear to ear, exposing his perfectly white and well shaped teeth—a rarity for an Indian man of his age and profession. The narrow path sloped gradually uphill, past beggars, a few men hand-manufacturing components for machinery, and a lonely buffalo to a stone gateway, our terminus. The top of the gateway had a drawing of two men wrestling and read, “Akhara bara Ganesh”

Before I go any further with this story, I need to backtrack one week to my introductory tour of Varanasi. Petra and I meandered down the riverbank like an inch-worm. She, accustomed to the sights, sounds, smells and other endless stimuli of Varansi, tried to keep me at a steady pace, but I got caught on things that needed more time for investigation. She’d go then wait. Go, then wait. And so on. It’s how I feel when I’m walking my dog Ollie through the rodent holes of pine park. If she was frustrated by my pace, she hid it well.

At one point I noticed some young men my age lifting weights and jumping rope up on a balcony. I compared their muscles to my beer-belly-in-the-making and asked Petra if that was a gym.

It was an Akhara. Here are facts I have gathered so far, although more research is due:

She told me a little bit about what she knew. Basically that it was a gym where they practice wrestling and lots of the city’s milkmen go there.

I half-joked with Petra, “when do I start?”

On Friday night, Petra asked me what I was doing the next morning at 7:30am. She got a text instructing me to meet Pinku (a friend of Navneet’s who I had met at a Kriti Gallery dinner) at an Akhara to meet the coaches.

I woke up early on Saturday, quite nervous. It was my Dad’s surprise 70th birthday party, so I had an early morning Skype call to my Dad’s party where I was passed around to every single member of the festivities. It was dizzying, but cool to be connected half a world away.

I told my parents what I was up to.Their response—“SO stupid” “You’re going to get hurt” “Idiotic”

I said, “You think a lot of things I do are idiotic, but I still do them,” wished them well and took off to the gym.  If I’m going to go down, I’d rather go down with my boots on.

The gym is set on a rooftop. You walk up steps through the gateway into a courtyard area. On the left side of the path are squatters who are cooking manure to make fertilizer and grow pot plants on the side. On the right are cows hanging out in a little rooftop pasture. You walk past these unlikely–yet ubiquitous in Varansi–sites for sights, through a row of bushes and into the gym space.

The courtyard is paved with stone. There are benches around the pit, a shower (which is a waist-height nob that you plug with a wood cork and squat down in a stone tub to rinse off, a well to fill the shower, a shed filled with stone weights and other pieces of equipment that look like they once belonged to circus body builders from the 1890s, and a small 10 foot by 30 foot gym with a bench press, some free weights, a pull-up bar, and a lats machine.

The center-piece of the Akhara is the clay pit, covered by a corrugated metal roof thats propped up by square columns decorated with simplistic paintings of snakes. On the north-east column there is a orange sculpture of Shiva that has been painted with so many coasts of uneven paint that it now looks like the blob.

Across the lane, acting as one of the backdrops of the open air gym, is a temple.  The two spires of the ornate roof stick up above the skyline beside the Akhara. The other side is a giant oak tree that provides shade to the gym as well as habitat to monkeys.

The Saturday that I met the coaches was an auspicious day, I was told. It was the day of one of the gods of strength and power. I introduced myself to the crew at the gym. Nobody there speaks english so we have a very primitive method of communication. But it’s seemed to work so far. After a brief introduction, they told me to and come back tomorrow for testing.

I returned the next day, more nervous about wearing the strange underwear than anything else.

Every move I make at the gym is watched by about 15 sets of eyes. Westerners have come to this gym, but only very occasionally, and only to shoot photographs or watch the age old traditions there.

Nobody has ever asked to participate.

It’s quite intimidating having every move you make watched like you’re the last remaining siberian tiger. Especially when you’re wearing a cloth speedo.

I showed up and a bloke who spoke the most english, a couple out of order words, came over and showed me how to tie my underpants. They decided that I’d look great in lime-green. Mine are way brighter and more flamboyant than the pants that anybody else wears. #freshmantreatment.

They told me to warm up, so I jogged around while every watched my circus monkey moves, then did one of Justin Moss’s Bowdoin Rugby style warm ups.

I was invited into the pit, but before entering I had to touch the holy mound of clay adorned with flowers.

Inside the pit, I tussled with a broad shouldered mustache man. (They all hate my beard, I think it’s regarded as a muslim thing, so I think I’m going to have to go back to movember styling if I stick around.

I tried to fight the hard fight, using my larger size and weight to my advantage, but he got me every time with technical moves. I’ve never wrestled, and was never the most physical rugby player on the pitch, but it was good fun.

At one point during the wrestling, two crazed monkeys started chasing each other around the ring. Everyone moved around to watch out for them because it’s very bad news to get bit by a diseased monkey. The monkeys left, and I thanked them, in my head, for giving me a quick breather. I then laughed to myself thinking, me and those monkeys are basically doing the exact same thing.

After a couple rounds I was completely gassed and the world was spinning. I made the timeout signal and got some laughs from around the place. I asked one of the chiefs how long I was wrestling. It felt like I was in there for about 12 minutes, but it was only 2 and a half.

They’ve started calling me the red man and are intrigued by the amount my body sweats. After the work-outs, the wrestlers take a sand bath and rub the clay into their skin. It’s supposed to be good for you, but also used to dry off. But only if you’re moderately wet. I get super wet, so I just turn into a clay man. It takes a lot of work to rub myself dry. The minerals in the clay are apparently cleansing. Who knows, though.

I returned again this morning where they taught me some moves and some stone weight exercises. I’m back again tomorrow morning but at 6:30am.

Two of the guys asked me what caste I was. I had no idea what to say, so I said just me. “Me only.” Ahh David Caste, they responded, likely in that thing humans do when they pretend to understand something they don’t at all.

They asked about my wife and were shocked to learn that I was only 23. They were thinking on the order of 35.

The uncomfortable feeling of being watched subsided today. I figure, hey if I can deal with this, I’m game for any number of public humiliation later.

It’s especially satisfying after the work outs when I walk out of that gate onto the street with wet hair and people figure out that I was just working out in an Akhara. I see peoples faces light up in wonder.  People like at me curiously in any section of Varanasi outside of the riverbank and tourist hotspots, but even more so walking out of the gym.

Before I left today, one of the guys came up and said, “I happy you come.”

Indian men in general are much more touchy-feely with each other. Its not at all uncommon to see to friends holding hands or closely hugging in shoulder wraps. I’m not about to get that close while I’m in my man-thong, so I keep my space around the arena.

But I do think it’s fun for these guys to have someone like me around.  It’s great to do something to try to improve my fitness and do something unique. I wouldn’t have been able to this opportunity without Navneet who has lived in Varanasi for his whole life and even he had to pull some strings. It’s also cool to discover this ancient, yet dying sport.

I’m sure, too, that some of this stuff will translate into rugby in the long term. 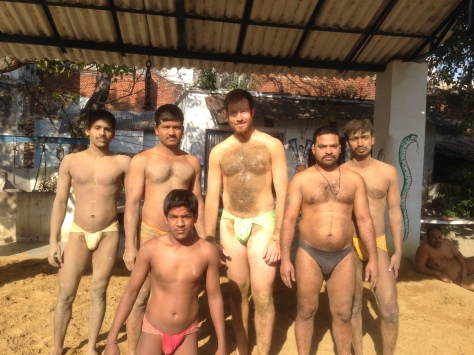 Here’s a painting—maybe not quite finished that I started yesterday. 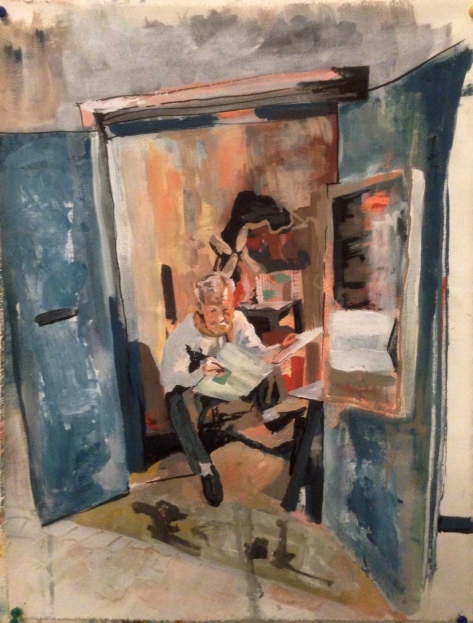 2 thoughts on “The Akhara”