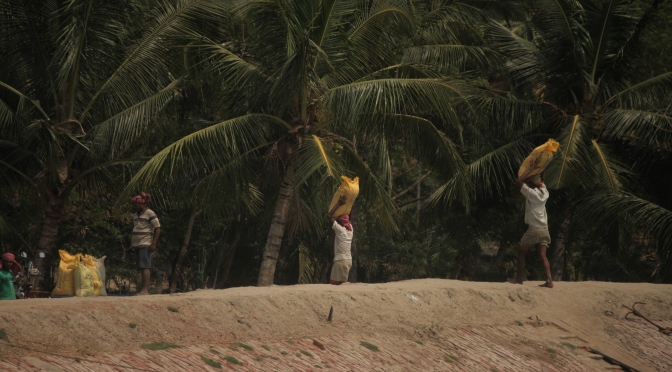 The Sundarban is the largest estruine forest in the world. It’s the mouth of the Ganges river; the planet’s biggest delta. The Sundarbans cover 10,000 square kilometers of jungle, the majority of which is mangrove. It forms the apex of the Bay of Bengal’s triangle between the east coast of India and the west coast of Burma, Thailand, and Malaysia. The forest is shared between India and Bangladesh, but two thirds of the forest lie across India’s border.

The Sundarbans reserve is visited by thousands of tourists every year because it is a sanctuary for the Royal Bengal Tiger.  There are only about two hundred big, mean, salt-water drinking felines. Territorial and solitary, tigers keep their space from one another. That means that on average, there is one tiger in every 50 square kilometers. The chances of sightings are minimal.

I went down for another reason, although seeing a tiger would have been a welcome bonus. In addition to being a ecological and bio-diverse wonder, the Sundarbans have a crucial importance protecting two of the worlds fastest growing, most populated, and poorest cities in the world.

Even though Kokata and Dhaka are over 100 kilometers from the Bay of Bengal, the Sundarban forest acts as a cyclone buffer. The mangroves are a protective shield, mother-earth’s storm surge barrier.  The forest cuts storms off from their energy source, warm ocean water, and tames their intensity before they hit landfall on the doorsteps of these south asian megacities. Cyclones need to pass through the mangrove jungle before they reach the urban one.

Officially, Kolkata is only 5 meters above sea level, which makes for a negligible gradient as the land slopes 120 kilometers towards the sea. Water looms all on sides. It flows down from the Himalayas in great rivers, ebbs and flows upstream from the Bay of Bengal, and for a couple months every year falls from the sky in the Moonsoon’s deluge.

Even after fighting its way through the banded web of the Sundarban mangroves, cyclones have hit the area recently, and with devastating results. Kolkata has been lucky in recent years as cyclones have veered easterly into Cox Bazaar, Bangladesh.

But more devastating outcomes loom ahead, especially as sea levels rise and drown parts of the mangrove. The loss of the Sundarbans threatens the habitat of the already endangered Bengal tiger and it threatens the livelihoods of over four million people that make their living on the fringes of the Sundarban (making bricks, fishing for shrimp, farming rice, or collecting honey (with masks on the back of their heads to confuse the tigers who always attack from behind). But the rising sea also has an effect much further down river as it hacks down the natural shield that protects two urban centers and over 200 million people.

The Sundarbans is far more effective than any designed storm surge barrier and would save Indians and Bangladeshis, many of whom can’t even feed themselves regularly, the task of funding a multi-billion dollar project to protect their homes.

The Dutch, who are ahead of the curve, are trying to emulate the natural process of the Sundarbans by pumping the seabed of the North Sea into fortifying sand dunes.

In India, they are accelerating the degradation of the mangroves with chemical pollution and rerouting rivers which off-sets the salinity balance and kills the species of mangroves.

Before I came to India, I heard and read how utterly shocking roads are in rural India. Adam Smith, a British director who I met in London described the roads as a ‘symphony’ as he waved and interlocked his arms mentioning the array of animals, vehicles, and human traffic that intertwine into a functional chaos.

I read George Black’s essay about traveling on the roads in Bangladesh which read: “By the end of the first day, it’s already become an ingrained reflex: brace for impact as yet another suicidal rickshaw, luridly painted with pictures of birds, animals, and Bollywood stars, swerves suddenly into our path. Our driver bangs on the horn, shimmies to the right, avoids an onrushing bus by a matter of inches, then calmly resumes his navigation of the demented streets of Dhaka, Bangladesh. I relax my death grip on the dashboard and exhale.”

Hearing those impressions for the first time, I smiled at the humor, reading through it as hyperbole.

But then I was there, immersed in it and thought, ‘Yes. Yes. You were exactly right.’

Before departing for the Sundarbans, my biggest fear was getting dragged off by a tiger in the middle of the night or drowned by a crocodile. If the animals didn’t get me, I feared the Dacoits, the armed pirates, (a tourist craft was robbed under moonlight by masked robbers in mid-february). I left all my valuables, except my passport, in Kolkata.

I was only a couple kilometers out of the city when I realized that my fears were not in line with the real dangers. If I was going to be hurt it would be on the trip down between the city and the boat dock.

Outside of Kolkata, heading south, the landscape is characterized by primitive mud walls protecting small conglomerations of palm-thatched houses, acres of paddies, and frequent brick kiln chimneys, emanating smoke,  that tower impressively high above the squalor, poverty, yet complete brilliance of a place where humans have built communities on landscapes where humans are simply not supposed to live.

The landscape looks iconically dutch, but without well-engineered dikes, cute windmills, or bike paths set apart from the roadway. Water is everywhere.

The roads are infested with bikes, scooters, and motorcyles, but dominated by big trucks that speed down the cluttered roadway with the same force that a 12-wheeler would barrel through the uninhabited desert in Nevada.

The bus I was on would scape by goods carriers loaded with pumpkins or coconuts. It rolled onto the siding of the thin road to miss a rickshaw so overloaded with plastic tubing that the loaded machines width was five times longer than the tuk tuk itself.

You see a car carrying an excess of a dozen people, you see trucks carrying a small village, families pile into rickshaws that could barely fit three people my size. Boys hang onto the backs of trucks, men sit cross-legged on roofs, legs hang perilously off the sides of cargo-bedded three wheeled motorcycles. Life is valued differently here.

I was sitting in the front row of the bus. Thick paned glass separated me from the cockpit where a driver and his co-pilot navigated the roads–that make New York City look like rural Maine, with lackadaisical confidence.

It was one of those situations that happen all too frequently in India, where you are tossed into an unpredictable situation and realize that it is all so far out of your hands. Might as well enjoy the ride.

I stepped off the boat and into the heat. The air was hard to breath. It was like stepping into a sauna, where the heat is so strong that it envelops you into invisible pressure that is persistently trying to knock you off into sleep. Even the dark skinned indians walked around with umbrellas to guard them against the intensity of the sun.

Before getting on the tourist craft, the boat wanted a xeroxed copy of my passport and visa. The man asked for my passport, I handed it to him. Then he asked for my visa, I showed him the page. Then he asked for my passport. I pointed at it. He was confused and didn’t realize that they were both in the same blue book. I didn’t feel great leaving my identity, my most valuable possession, and my ticket out, left at the hands of a 5 foot short jittery man as he disappeared into the cracks of the village so I followed him, keeping my eyes on my passport the whole time, and giggling to myself about how ridiculous it must have looked to have this tiny man chased through the back-alleys, canal sides, and markets of this compact and hectic fringe town by a white man, drenched with sweat almost double his size.

The cruise set off.

We passed through settlements above, where people subside off of honey collecting, shrimp farming, and live in mud thatched houses, many of which had solar panels on the roofs and satellite dishes on the sides. But the villages were primitive and far more interesting than any of the wildlife we saw (some birds, mud skippers, crabs, a couple of lizards, deer, a wild boar, and the fin of a dolphin). There was a troupe of young IT engineers at TATA, one of the biggest Indian multinationals, that reveled at the sight of deer. Understandable for people that live in the thick of a city like this.

For me, the wildlife touring was significantly less interesting that watching the settlements on the fringes of the wildlife sanctuary and national park. But the day cruise that followed was peaceful and highlighted by sunset and sunrise in one of the remotest and wildest places I’d ever been. I slept that night, outside my cabin could have been the set of the heart of darkness but I rested pretty soundly with malaria-pill enhanced dreams and was happy that I slept through the night without being awoken by a masked robber.