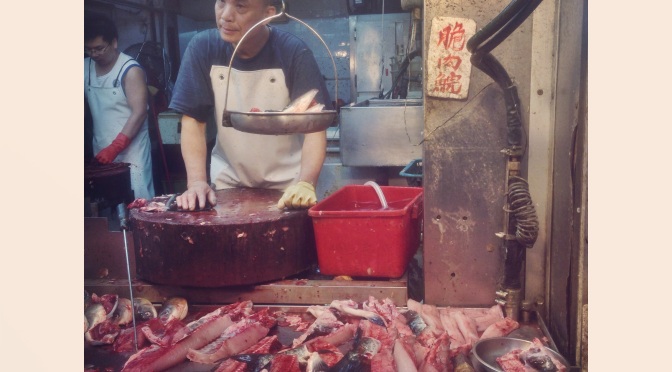 Her outfit of shin high fireman-red rain boots, aged blue jeans, a white v-neck t-shirt and a bob of permed black hair made her look like a clammer scouring the Cape Cod bay at low tide. She was short and elderly but she moved around her market stall swiftly.

From below a table, she picked up a turtle, which retreated into its shell in flight as it was transported from a watery bucket where it rested. She nonchalantly placed the turtle on a sanded down stump of wood and turned around to continue her conversation–or bargaining–with her customer, an extremely skinny man with wrinkled eyes who had a lit cigarette hanging from his bottom lip that wagged around like a loose screw as he talked. I couldn’t follow their Cantonese dialogue.

The turtle, oblivious to the transaction going on outside–on a layer of the  universe beyond his realm of comprehension–set his feet down to feel out the new ground. After safe footing, he stuck his head out to take a look.

On that cue she grabbed a meat cleaver, an object unbefitting of her loving grandmotherly character, and decapitated the turtle without pausing her speech or taking her eyes off of her customer. The headless turtle squirmed its legs, as if to make a run for it, until they descended for fifteen long seconds into a terminal stillness.

The legs and shell were tossed into a pool of boiling water while the turtle head lay on the wooden chop-block, obviously out of context. Softened by the hot water, the turtle’s body was picked apart, opened up, artfully divided by the lady with tremendous skill and dexterity with the meat cleaver, put the pieces into a plastic bag, and then handed to the man.

This was the fish and meat market in Hong Kong. The turtle slaughter was just one tiny stall, a small component of a half kilometer of food processing. Vendors put their offerings–fish and meat that ranged from razor clams to pig snouts, ears, and hearts–on display in damp, smelly stalls that were lit by the glow of red lights. There were turtles, toads, and tuna steaks. Some of the steaks were so fresh they were still twitching. Behind the banter of the customer’s exchange, buzz saws scraped against frozen animal as they cut limbs into portions.

Sights like this are startling to see. It’s vulgar, barbaric even. We are used to collecting food from a grocery store fridge in plastic packaging. It’s too easy to forget the source. I’ve always been a believer that if you are willing to eat an animal you should also be willing to personally kill it. Not in order to be violent, dominant or aggressive, but to have a fuller understanding of cause and the effect.

I stumbled upon this market yesterday after hiking along Hong Kong island’s eastern ridge line to a beach called Tai Long Wan (Big Wave Bay). It’s amazing that a nature preserve and beautiful hiking trail is accessible within 30 minutes from the center of the city. 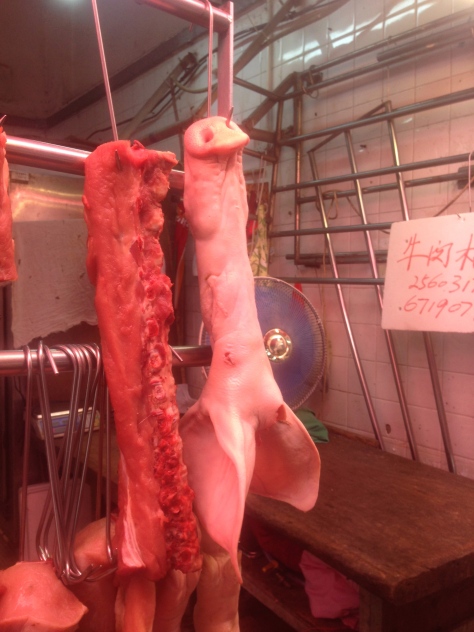 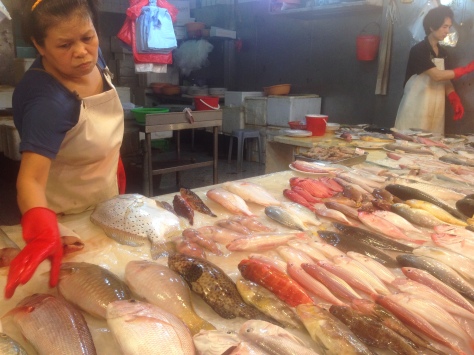 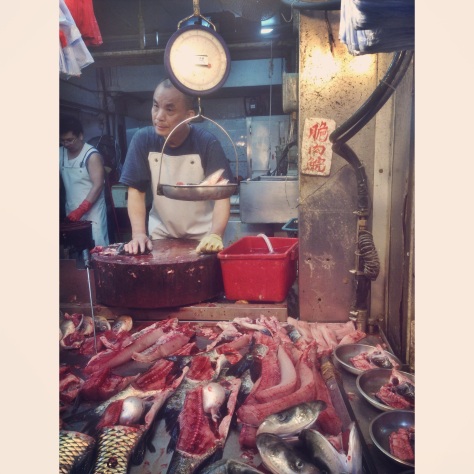 The Yangshou bus station attendant was an middle aged lady with a black bob haircut and a motherly smile. That smile was enough to trust that she would put me on the right bus once it arrived in town from Guilin. Either way, it was all I had. I was drifting in a translation-less current with no paddles to steer with and no fabric to rig up a sail.

My ticket was a sticky note that she had just scribbled some numbers and Chinese characters on. She handed it to me in exchange for a punk leaflet, as thin as rice paper and as feeble as tissue paper, that I was given at the hostel after I paid 230 yuan for the trip.

I got to the bus. It was facing the wrong way on the wrong side of the street at the bus station. The station was no more than a corrugated metal roof over a gap in between two buildings as the road turned from town into countryside.

After I dropped my backpack off in the storage hold, I waited outside the bus and listened to an argument ensue in the main compartment. Besides hearing the hostility, I had no idea what the conversation what about. I assumed it was about the validity of a ticket or rights to be on board. Whatever it was, it caused confusion and a hold up at the door.

I climbed aboard and the driver signaled at me to remove my flip flops and put them in a plastic bag. I got a glimpse of the ‘sleeper’: two floors of three rows of 8 bunks. The front above the driver was a larger surface area. It was covered with a thin mat that could otherwise be used to cover a wood floor in a gym or to cover lawn furniture. The thin rows of berths were like baby’s cribs that were tucked into each other like puzzle pieces. The legs rested underneath the back rest of the man in front. The bus ended up looking like a transport for uncovered Egyptian mummies.

I was the last one on the bus. Every single berth was taken and people had even started piling blankets into the 2 foot wide aisle to accommodate the overflow. The driver’s assistant signaled broadly towards the back of the bus but it made no sense. I started working my way into the depths of the bus stepping over people making nests in the aisles. My shoulders were too broad to fit between the bunks so I had to kneel down beneath the top bunk. The experience induced claustrophobia. Everyone was staring me down as if I was a zoo animal, and my crab-like gait only added to it.

I thought I was going to have to hunker down onto the wooden aisle before a Minnesotan accent from the very back gym mat called out, “You back ‘ere?” Turned out my berth was in the back, next to the motor wedged with two people on either side of me. On my right were two westerners who were teaching in Shenzhen, one from Minneapolis the other from Manchester. On my right were two miniature Chinese girls. I fit in with no room to spare. Shoulder to Shoulder. Hip to Hip. Foot to Foot.

They told me the argument was in fact about space on the bus. The bus’s manager was trying to kick some people off who had bought a ticket “too late”. But they claimed that they had a ticket and were let on the bus and now they won’t leave it. So the bus was overcrowded. But by more than just a few people. Even in individual berths, children slept alongside their parents.

That was the closest I’ve ever been to traveling in a chicken coup. As a chicken.

Last night, I got a sense of how the majority of the people in the world sleep every night. Not in private bedrooms but packed in next to friends, families, strangers. Without air-conditioning but sweating next to hot slimy bodies.  Not on comfortable and well engineered mattresses but on hard floors.

Needless to say, I didn’t sleep well. I dozed off for a couple minutes at a time and the ride from 9pm until the first stop at 2:30 felt like over 8 hours.

But I enjoyed the experience for the sake of experience. I knew I wasn’t committing myself to sleepless nights for the rest of my days so hunkered down, read some NYTs op-eds on my iPhone and thought about the hilarity of bumming through the Chinese countryside in a sardine can.

I eventually started to knock off, but every sweaty touch with the Minnesotan next to me woke me up again. He was sprawling out, taking up an unfair share of the finite space. The Chinese girls on my right were rigid and I feared getting any closer–from the inch boundary that was already between us–due to cultural and social unknowns and my terror of crossing any lines and being, lost in translation, accused of something I never attended.  Perhaps it was the NYTs editors in my head but they way the westerners  on my left and the Chinese on my right slept, were symbols of their cultural attitudes and how their disregard effected their environments.

After 4am the bus stopped every 30 minutes or so and it began to empty out. A bunk on the second level opened up and I climbed up into my own space (just as constricted, but against walls and gates rather than strangers).

I was told that the bus would drop me right off at the border with Hong Kong. It didn’t.

I had looked up the name of the Shenzhen metro station that crossed into Hong Kong so I knew what to look for. But I was ushered off the bus into an unknown Chinese mega-city (over 8 million). No english. No idea where to go. It’s probably the closest feeling I’ll ever get to exile, or to relate to climate refugees when they are forced out of their homeland, packed into vehicles and dropped off in unknown places. I walked around in the morning heat for a bit until I noticed a bus station of the same name and trudged up to it to find immigration into Hong Kong.

I crossed the border, walked onto the Hong Kong metro, transferred to four different trains and knocked on the door at yet another hostel. The tally of the number of ‘beds’ I’ve slept in this year is getting big.

I can’t say all of these cities are blending together yet but I will say this: Hong Kong has London’s street painting and traffic lights. The taxis are like Shanghai’s. The metro is like Singapore’s. It is a city-state in east Asia that was once colonized by the British so the pieces make sense.

I’ve got more to say about Shanghai and Yangshou. To follow.